Angkor Centre for Conservation of Biodiversity

Angkor Centre for Conservation of Biodiversity

Pileated Gibbon (Hylobates pileatus)
This primate species belongs to the gibbon family which is also known as lesser apes. It lives in Cambodia, Laos and Thailand. Males and females can be distinguished from each other by their colour. Males have a black fur, only fingers, toes and the fur around the genitals is white. Females have a grey to beige fur with black belly, vertex and cheeks. Both sexes have a white-furred collar which is often shaggy. Pileated gibbons are diurnal inhabitants of dense primeval forest. The IUCN lists the species as endangered (EN).

Silvered Langur (Trachypithecus germaini)
The Silvered Langur or Silvery Lutung, as the name indicates, has silvery fur, with darker tips and yellowish at the tail. The species is diurnal and lives in harem groups in the dense primeval forest. Langurs have developed a highly complex stomach due to the digestion of the cellulose from leafs and fruit. Their habitat continues to be destroyed by illegal logging and non-sustainable agriculture.

Northern Slow Loris or Bengal Loris (Nycticebus bengalensis)
The slow lorises are small nocturnal and arboreal primates from Southeast Asia that prefer the tops of the trees and have slow, deliberate movements. Depending on the author, 3-5 species are distinguished. The Bengal Loris lives in Cambodia, China, India, Laos, Burma, Thailand and Vietnam. The population trends of this species are unknown, but it has been intensively hunted as it is a popular pet species and used in traditional medicine in many ways. A special characteristic of slow lorises are glands at the arms. The secretion, mixed with saliva, is a toxin so that bites can result in painful swelling and anaphylactic shocks. Therefore, the teeths of slow loris are pulled out for the pet trade.

Malayan Pangolin (Manis javanica)
The Malayan Pangolin, like all species of pangolin, shows large scales on the skin. When threatened, pangolins use these scales as armour, rolling up into a ball by wrapping the tail completely around the body. The species lives on the ground, but is able to climb on trees as well. Being nocturnal, animals spent the days in tree holes and burrows. At night they start searching for their food: ants and termites. With their powerful claws they easily get through the soil. Due to this specialized diet and delicate nature, pangolins are extremely difficult to keep in captivity. The IUCN listed this species previously as near threatened. However, due to the fact that all species of Asian Pangolins are heavily hunted for use in traditional medicines or as a delicacy, its status was upgraded to endangered (EN) in 2008. Deforestation of primeval forest and destruction of the habitat are also imminent threats to the species so that the wild populations may decrease rapidly soon.
For more information visit SavePangolins.org.

Asian Palm Civet (Paradoxurus herma­phroditus)
The Asian Palm Civet belongs to the family of Viverridae and has a thick, rough black coat and a racoon-like face colour. The species lives in the tropical rainforests all over South and East Asia.
Like most Viverridae, the Asian palm civet is a nocturnal animal and sleeps in tree holes during the day. Its diet consists of insects and fruits, among them coffee cherries. These fruits receive a special flavour by the partial digestion of the animal and are harvested by men from its faeces to process the famous coffee “Kopi Luwak”.

Leopard cat (Prionailurus bengalensis)
The Leopard Cat is a small wild cat in the size of the domestic cat that lives in South and East Asia. Due to its large distribution area, several subspecies are distinguished that may exist in different kind of habitats. The overall population is not endangered, but regionally the species has become rare.
The Leopard Cat is a solitary nocturnal animal and sleeps in tree holes or cavities during the day. Its diet consists of small mammals, birds, reptiles and insects as well as fish and crustaceans. 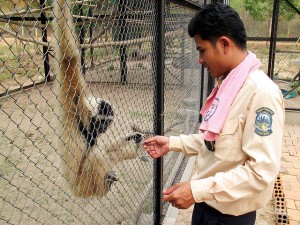 Gibbon at the Angkor Centre for Conservation of Biodiversity

Let us ensure you have an unforgettable adventure in Cambodia! For Inquiries or to Arrange a tour, do not hesitate to Contact Us!